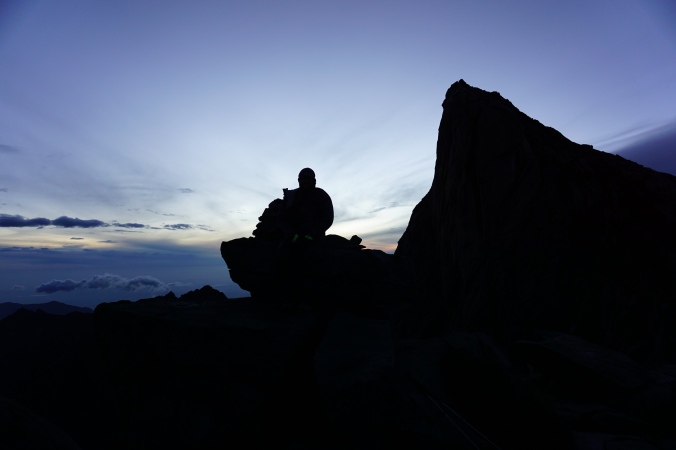 Mount Kinabalu is a major tourist draw in Sabah, the northern province of Borneo. Thousands of people successfully climb its summit each year with ages varying from teenagers through to the elderly. Daily, people slowly trudge their way up the hillside to view the sunrise from its 4095-metre-high peak. As a result, it is one of the most popular tourist attractions in Sabah.
When I attempted to climb Mount Kinabalu earlier this year I was under no allusions that it was going to be a physically demanding undertaking. As the tallest mountain in both Borneo and Malaysia, trekking to the summit isn’t as simple as taking a stroll to the corner store. To underestimate climbing a 4095-metre mountain is something a person does at their own peril.
As it turns out, I am apparently a very perilous person.
When climbing a mountain, a certain amount of preparation should go into it. In theory, some kind of training regime should be adhered to in order to help navigate the various challenges climbing a mountain demand. Some will go for daily runs, while others will hit the gym. Regardless of tactic, physical preparation is a must. In principle that sounds like a fair plan. I myself did not heed such advice.
Australia is a naturally flat country. Our highest peak, Mt. Kosciuszko, is a sedate 2228 metres high and can be climbed in a few hours. The town where I live is a stroke inducing 225 metres above sea level. Not exactly touching the clouds. My point is that regardless of preparation, I was climbing an altitude far above anything I had experienced before. This in itself should have been warning enough.
What I have learned is that maintaining 10,000 steps a day, like the health experts suggest, is not equal to a mountaineering fitness program and does not help you in scaling said mountain. Furthermore, walking on a dead flat surface in achieving those steps will not make you the next Edmund Hilary. I knew this, but had talked myself into believing I could bluff my way up, fool the hill into believing I was worthy, dance a jig at the top and descend before anyone else was the wiser. The end result was that the mountain is smart, I am dumb and anyone considering this hike should heed my warning.
On paper, hiking Mt. Kinabalu is not overly stressful. The journey is a 17-kilometre round trip beginning at Timpohon Gate (the checkpoint to the track at a leisurely 1500metres above sea level), staying the night at Laban Rata Guesthouse (or one of the other accommodations) six kilometres up, hiking the summit the next morning for sunrise and descending back to your start point. All hikers require permits and all must have guides. It’s a fairly straight forward, 2-day, 1-night experience. Ages of hikers vary from young adolescents in school groups to people well into their late seventies. It’s a safe assumption that the vast majority of all people make the top with little fuss.
In theory, it should be straight forward.

Our climb started out gently enough; a nice comfortable amble along the rocky trail. Our guide, Aziz, informed us that he had climbed the mountain over a thousand times which is a nice little confidence boost to begin the trip. I’m not sure why this little titbit made things easier- when your job is to take people safely to the summit of a mountain and back again, you’ve probably done it a couple of times- but it instilled confidence in our guide.
As we climbed, a slow trickle of people began coming down the mountain after summiting that morning. It should have been of slight concern that every one of them legitimately looked as though they had been up since 2 a.m. and walked up a steep mountain. You can try and find another way to describe how each of them appeared but the simple fact is they all looked spent. Some limped, most looked at the ground, all commented that we were the first that had seen come up so far. Every one of them wished us luck like we were marching off to our doom.
At this point you’d think I’d put on the brakes and conserve my energy. Clearly, based on the steady stream of walking dead coming down the track, things were going to get tough over the next 48 hours so walking at such a pace that even our guide was short of breath, wasn’t going to be conducive to sustained physical wellbeing. One fellow had a look of confusion on his face and was limping badly, “I don’t understand. My knees are giving out on me and I don’t know why.” Instead of informing him that it may have had something to do with the fact he’d just climbed a mountain for the first time, I wished him luck and told him to keep on trucking.
This should have been a solid warning sign. I’m asthmatic and have had two knee reconstructions and an arthroscope. It’s safe to say that my body isn’t a finely tuned machine. More like a used car that occasionally stalls and has no recognisable service history. 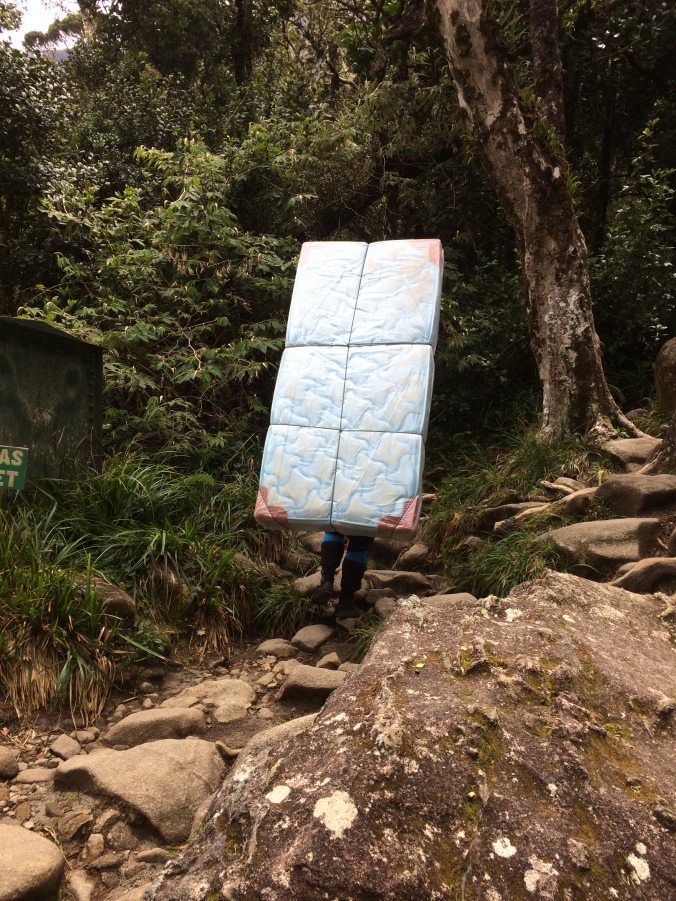 The higher we got the deeper my breathing became. You realise you’re slowing down when each time you stop for a break at the designated rest areas, the Bornean Mountain Squirrels (not their official name) aren’t afraid to come close and sus you out. You also realise you are slowing down when it becomes harder to catch up to the local porters. They were all carrying an array of supplies tied to boards strapped to their back, slowly tramping up the mountain. They items carried included but were not limited to- single mattresses, eggs (a lazy 360 or so at a time), bags of rice, fresh vegetables, cleaning products or, in the case of some guides, four or five tourist backpacks.
That first day was comparable to walking up a 6.5 kilometre set of stairs made of boulders.

The overnight stop was at an elevation of 3500ish metres. Some people begin feeling the effects of altitude sickness from 2500 metres and upward but it wasn’t something that overly concerned me. A regular at work back home had tried to warn me about it and suggested taking Viagra to counter its effects. It was hard to tell whether his advice was genuine or whether he just liked to throw the word “Viagra” into general conversation and wait for the reaction. Either way, I relegated his warnings to the “interesting but not concerning” category of acquaintance advice assuming Viagra was a regular conversation topic for him. 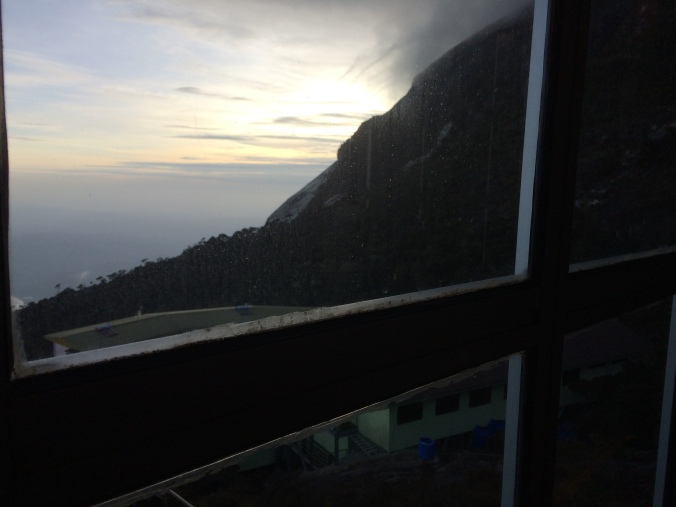 We had dinner at 4 p.m. and were in bed by 7.30 p.m.- times which are usually set aside for retirement communities and infants. As unnatural as it felt, knowing we were to get up at 2 a.m. the next day and we were already completely spent made it easy.
By 2 a.m. there was a procession of torchlights snaking their way up the mountain. It was an impressive sight from what I could tell in-between deep breaths, staring at my boots and cursing flights of stairs. It was similar to being stuck in a traffic jam in a way. You are only as fast as the person in front and speeding up to overtake involves spending energy you are acutely aware that you are going to need. I quickly dropped back in the pack, taking smaller steps. I was walking in time with an old man. He never stopped, never stumbled, just maintained his speed and shuffled on. It’s an ego hit to be shown up by a pensioner, but inspiring at the same time.
The stairs gave way to rock slabs with a rope line leading the way. It lulled me into false hope on more than one occasion as false summit after false summit fooled me into thinking there would be some respite. My legs were heavy, my muscles sore and my breathing deep. My thoughts went back to my lack of preparation. I could feel a blister forming on my toe. I was using hiking poles now and dragging my sorry arse up the rock. An elderly lady overtook me, holding the hand of her guide. I looked around for Aziz, holding my hand out, wondering where my hand holding guide was. He was relieving himself behind a rock. Either hand holding was an additional extra or I was boring the piss out of him. The old lady was pulling away from me. It was like a slow-motion car chase.
I soldiered on.
Some younger, fitter, better prepared hikers were already on the descent. This bemused me as the sun was not yet up. The point of climbing a mountain for the sunrise would be, I assume, to actually see the sunrise, rather than getting up in the dark, looking back out into the dark and remarking, “I bet it’s good,” before walking off again.
I’m not ashamed to say that I gave up. I only had 400 metres remaining but had I attempted the summit there is a strong possibility that I would still be walking to this day. By the time I stopped, I was taking three steps to walk a foot and having to take a breather every five metres. There are emphysema sufferers that could walk it quicker. I couldn’t feel my finger tips and felt nauseous. My friend had to take my camera out and take photos for me. I was done.
I turned around and walked the eight kilometres back down the hill. As I did I passed the old man I had seen earlier. He was still going at the same speed, slowly upwards, determined as ever. How long it took him I’m unsure.
The experts will say I was unfit and poorly prepared. I will tell you that a lack of altitude acclimatisation was my downfall. Most will say I have the perseverance of a wounded sloth. The reality was probably a mixture of the three and I’m fine with that. That I didn’t make the top matters little. What I was able to do was watch the sun rise from the saddle below the summit on a clear morning on Mt. Kinabalu. Those views make the whole ordeal/experience worth it. I looked up at the top, admitted defeat and had a newfound respect for those who had been able to reach the roof of Borneo. Sure, I did it in a haphazard, unrecommended way. I lost a toenail and squirrels openly mocked me but if some people don’t make mistakes, who’s going to tell others what not to do?
Wayward Tip: Respect the mountain. Do some training.