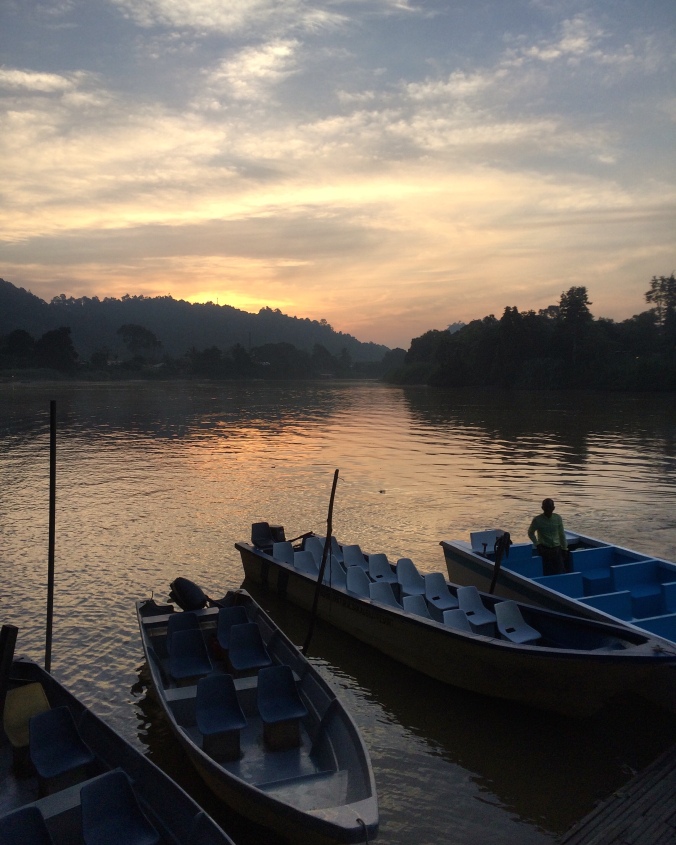 If I’m being honest, I had never heard of the Kinabatangan River before I agreed to travel with a friend to Borneo. He was excited to head east and spend time exploring the area famous for monkeys, crocodiles and elephants. My theory was if someone was that damned excited, it must be worth the effort.

For the uninitiated, the Kinabatangan River is home to a myriad of wildlife in Northern Borneo. At 560 kilometres long, it is the second longest river in Malaysia and as a result there are a number of tour operators that utilise it and run nature resorts. The river itself is regularly used by the locals for fishing and the like but tour boats seem to outnumber them in many places.

We signed up for our tour in the capital city of Sabah, the northern province of Borneo, Kota Kinabalu. It was as simple as walking into a hot, little shop front called Asia Green, sweating a little bit, and handing over a deposit. We chose the 3-day, 2-night option for the princely sum of $160 (depending on conversion rates). There was a cruise each morning and night and regular hikes through the surrounding jungle during the day and at night. Perfect really. While these activities can, and are, no doubt booked in advance by hyper vigilant travellers, we walked in off the street and booked a three-day experience for the next day. The only catch is that we had to catch a bus at 7.30 a.m. the next morning and drive for six hours just to catch a shuttle bus to our ecolodge- the Sukau Bilit Resort. The lodge was located near a village called Bilet but there are many other little towns along the way that have Eco resorts nearby.
(NOTE: I think calling it an ecolodge is a polite way of saying “in the middle of the jungle” however all things “eco” are very much in vouge at the moment when travelling to far flung, wild locations.)

The place was like some kind of kid’s tree fort masquerading as jungle accommodation. Everything seemed to be on elevated boardwalks, like the ground was lava and we weren’t allowed to touch it unless under the supervision of staff. The dining area was a massive open space that was looked down upon by a second story full of hammocks, accessed by a spiral staircase. My inner kid was doing backflips. We stayed in a dorm room with some other younger travellers. Walking from the dorm to the dining area you could see snakes in trees and birds in abundance. It was pretty much what I thought an ecolodge-in-the-jungles-of-Borneo might look like. In fact, if you Google image those words you’ll notice that all ecolodges coincidentally seem to look the same and you’ll get a fairly good idea of what you’re dealing with.

Within 45 minutes of arriving we loaded into boats and took off down the river. I have been on safari’s in cars before and this was much of the same; stopping whenever we saw something move and looking at it in awe. Or in my case, looking at it in awe, taking a picture, trying to figure out what I’d taken a photo of, attempting to find it in the photo and then cursing not having a camera that had a bigger zoom when I couldn’t. I’d look over at the Chinese couple who were brandishing a lens so big they could have accurately photographed satellites in space and identified them by their markings. IT was pure spyware. She would spot things with her binoculars and he would take approximately 500 photos of it in rapid succession. It was a sophisticated operation although if he turned too quick he was in danger of inflicting injury to anyone within a one metre radius. 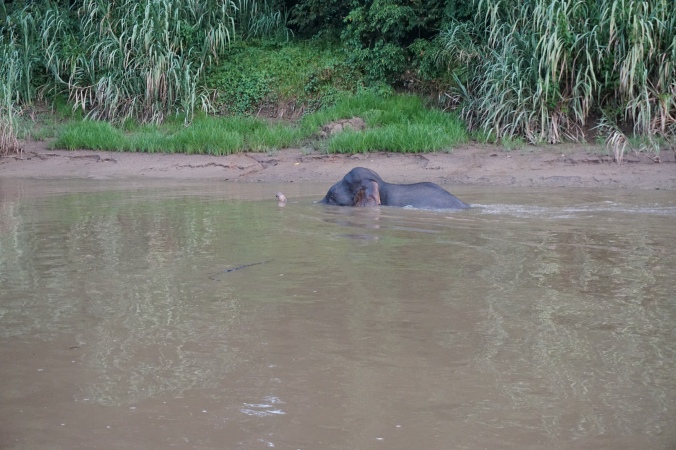 Our driver/captain was a man by the name of Mr. Aloy. He was the most enthusiastic tour guide I’ve ever had. He was genuinely excited by just about every living thing that he laid eyes on even though, I have no doubt, he drove the river every day. He wanted us to see everything and anything. It was more impressive that he could spot and name animals from some distance. All species of bird- hornbill, storks, eagles (anything with feathers)- monkeys, lizards and mammals. He had the eyes of a hawk and the boating skills of a coast guard.

We spotted orangutans sitting in tree tops that looked nothing more than orange silhouettes. Looking up in the trees and catching a glimpse of a red, furry flash, long arms swinging from branch to branch has a surprisingly calming effect. Maybe it was because they are so endangered, but I felt lucky. It didn’t matter how far away they were. My feeling was that being able to see a wild orangutan was one of the coolest experiences I had ever had.

There were other monkeys of course. Long tailed macaques were a dime a dozen. They would roll around in large groups, like an organised crime syndicate. It felt like that because they really didn’t care. We were warned earlier that they would steal your shoes if you left them unattended, would help themselves to unattended food and make a general nuisance of themselves- “naughty macaques” Mr. Aloy called them. It got to a point that if we saw them near the water’s edge we would barrack for a crocodile (of which there were many) to emerge just to keep the monkeys on their toes. It never happened.

There were also proboscises monkeys which were far more entertaining. They are defined by their strange nose. It’s like someone has attached a penis shaped lump off the front of their face as a joke but forgotten to take it off. It’s hard to take them seriously. It’s an unfortunate description but if there is a better one I am yet to find it. 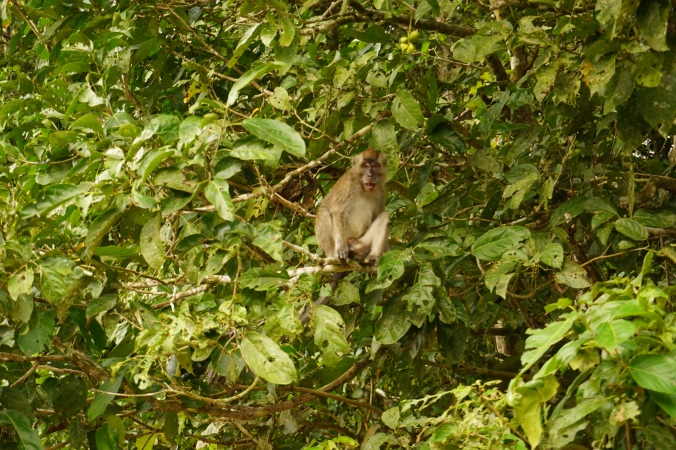 We were lucky enough to find a herd of wild Asian elephants swimming across the river. This didn’t happen by chance; Mr. Aloy had deliberately waited for the other tour boats to head downstream and then went upstream in the opposite direction. We cruised along, stopping to either ask a local for more information on the elephants in the area or for the Chinese couple with the lens as long as your arm to take another picture of another hornbill. You could hear the elephants before you saw them as they bashed through the bush, talking loudly to each other. We putted along next to one for a few minutes as it swam in the shallows. We stopped after it got startled by a lizard and refused to swim any more. Why an elephant is scared of a lizard as it swims in a river full of crocodiles is not something I have the answers to. Before we arrived back at the lodge, Mr. Aloy gave us some sound advice, “Maybe don’t tell the other group. Let’s keep this quiet.” If he was doing all this for a good tip, he earned it.

One evening after one of the night walks, another guest walked up to our table with a large scorpion sitting on her arm. This thing was the size of a small dragon- something you expected to see a villain get bitten by in an Indiana Jones movie and then die a horrible death, usually involving boils on the face and lots of over acted screaming. Quite calmly, she informed us that one of the guides had picked it up and placed it on her arm after ‘removing the stinger’. I’m still not sure if she was showing us or asking for help. The guide came sauntering over with a huge grin on his face, took the scorpion and proceeded to ask us if anyone else ‘wanted a hold’. I showed him my beer and told him I had a lot on. He shrugged and walked off, almost like he’d forgotten that he had a small medieval creature calmly sitting on his forearm.

The Kinabatangan River provides some amazing wildlife opportunities no matter which operator you use. Whilst some with have a more environmental focus than others, depending on your ethics, they will all offer great opportunities to see animals in the wild that you may never get the chance to see in any other setting. Or in the case of the orangutan, ever again in the wild.

There was an error retrieving images from Instagram. An attempt will be remade in a few minutes.