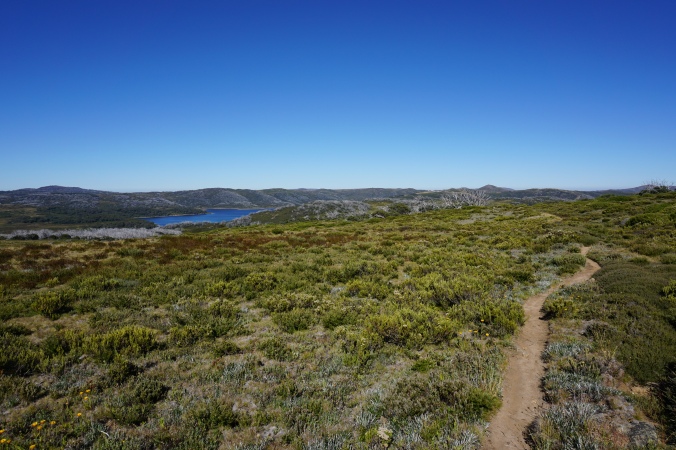 Over the last eight years I have worked on and off as an outdoor leader, working with schools and helping them facilitate their outdoor education programs. This usually means leading hiking trips or paddle journeys through some of the more beautiful places that Australia has to offer. Getting paid to do this privilege seems borderline rude until you remember you are dealing with teenagers in remote locations.

Just a few weeks ago I walked the Bogong High Plains with a large group of 18 students. Not only was this a first for them, but it was also a first for me as well. I could vaguely remember spending time in the area during my time at university obtaining my degree in camping (technically called ‘outdoor education’ but camping is far simpler to explain) but could not recall seeing the High Plains without a thick covering of snow.

We began slowly and only had to walk roughly 500 metres on the first day due to having spent the entire day travelling on the bus. The mountain road that climbs up to the alpine village of Falls Creek feels like it is never ending, like each corner is on a loop of one of those video memes that deliberately infuriates you by failing to finish.

Over time, I have learnt that a large groups of adolescents struggle with decision making. It’s like watching grass grow- it happens but you can’t rush it. They tend to get exasperated easily and end up expelling a large amount of air in frustration that emits itself as a high pitched whining noise; a lot like a toddler trying to communicate with an adult or a politician during an interview. They are inclined to instead just stand around, pawing at the ground with their foot like an agitated bull in a paddock, hoping someone else will do the dirty work for them. If you want a seventeen year old (or politician) to remain silent, ask them to make a well thought out decision.

This is what we were faced with 500 metres into our hike. It was late, we needed to set up camp in an area where we could all fit and if we had let them go, they would have happily trudged on like Lemmings to the cliff and then blamed us as leaders for not stopping them as they walked over. Australia’s alpine region has notoriously fickle weather systems where hot days can be matched by bitterly cold evenings and as the sun began to dip, you could feel the temperature plummet. I wanted to be in my tent when this temperature drop happened. 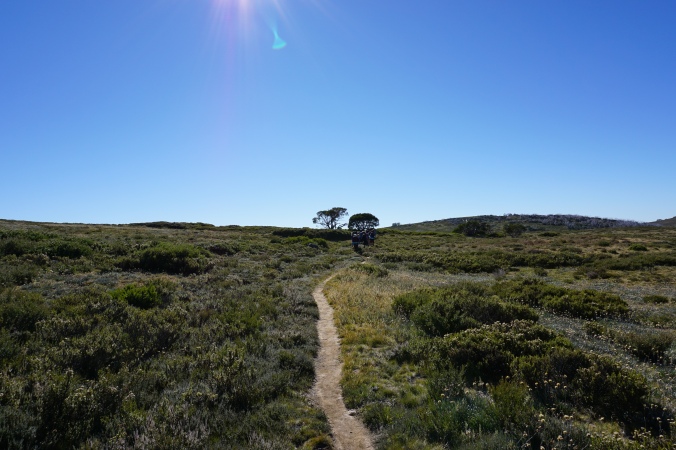 Walking along Heathy Spur Track the next day I already gained a greater appreciation of just how beautiful the Australian high country really is. Sweeping plains of long, yellow grass swaying in the breeze; a sight that no matter how good your camera is, you always feel as though the image you capture isn’t good enough to do it justice. The problem with hiking with a pack on is that you spend an inordinate amount of time watching the ground, taking every precaution to prevent yourself falling on your face in the middle of a flat walking track. No matter how experienced you are, you ultimately spend large quantities of time looking at your own feet. It’s when you look up that you need to stop and admire what you have been walking through. Particularly with inexperienced hikers, this problem is hard to eradicate.

“Did you see that back there?”

“The falcon hovering above that tree.”

“We’ve only been walking five minutes…”

The loop from the Happy Valley Dam wall uses several different types of walking track; some are singular, like goat tracks, some are four wheel drive tracks and others are marked roads, both dirt and bitumen. It uses large tracts of the Australian Walking Trail which makes navigation a simple task so long as you stay to the paths and know how to read a map.

Water wasn’t plentiful either. While the hike is littered with aqueducts carrying water to the dam, the small springs and creeks weren’t as giving. We put that down to a long dry summer and treated all our water accordingly- the last thing you want is to get sick in the middle of the Australian wilderness.

I was particularly excited to see Wallace’s Hut. It was a slight detour but something that was important for educational purposes. As one of the most iconic mountain huts in the high country I had seen it in plenty of photos taken by the famous Australian photographer, Ken Duncan, usually hanging on the walls of friends’ houses, but never in person. Although it looks humble in size and simple by nature, its place in Australian history is impressive and should be revered.

Even though the students admired it (they were slightly less impressed than me), they seemed more interested in the drop toilet located a short distance away. Apparently, a remote drop toilet has the innate ability of making someone’s bowels immediately need to open. Like, for example, all eighteen students in our group. Clearly the idea of taking a trowel off into the bush and digging your own hole is confronting for a group of students when they would rather line up and wait at a composting toilet. A ten minute detour turned into a 45 minute break. One student even went twice. I was concerned and impressed all at the same time.

Meandering on, we walked by Cope Hut and down the inexplicably beautiful plains toward our stop for the night, Cope Saddle Hut. The little but was basic by nature, little more than a small, white shed with a red roof built by an electrical company as a source of shelter for employees in times gone by. The high country huts are all there for this reason; half for posterity and half for shelter and safety. All different and equally interesting.

We came across another group from a different school. This is not uncommon in nature areas- the great outdoors is a fantastic classroom, after all. They were a younger group than us but what was more surprising was that one of the staff accompanying them chose to walk in jeans and Blundstone work boots. “He’s probably carrying an axe in his pack as well,” one of our leaders remarked, which would have been funnier if we didn’t think there was a slight chance it was true. People prepare for hikes in the wilderness in different ways, not all of them correctly.

We continued through the plains the next day, stopping at Mount Jim for a brief detour. All the little knolls on the High Plains seem like small bumps and it feels ridiculous to call them mountains until you realise you are on the highest plateau in Victoria and at a considerable height (by Australian standards anyway). The reason for our stop was to check out a magnetic anomaly at the summit. What we found as a result was a fantastic view of the valley on the other side and a mob of wild horses playing around, small foal included.

The walk always appeared very snake friendly. Long grass and low lying shrub created perfect conditions for snakes. I didn’t see any but that always made me more nervous. Fear the snake you can’t see rather than the one you can. Most of the students were wearing gaiters (leg protectors for just such environments) but I was not, having left mine behind by accident. I’m the type of person who only forgets things he really needs, as opposed to all the other useless crap he remembers to bring. 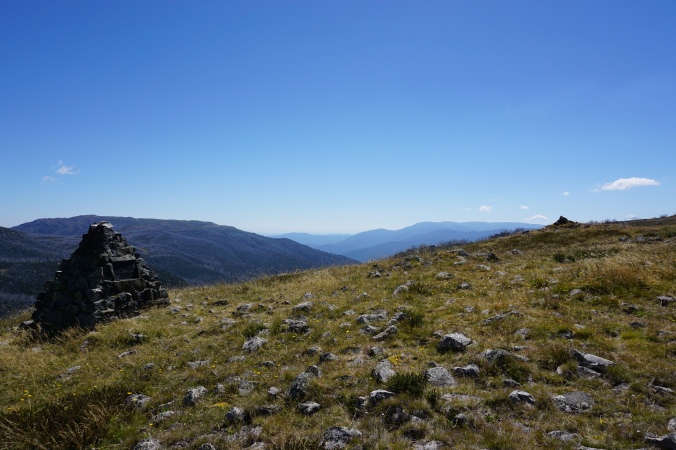 Soon we dropped onto a four wheel drive track and began walking back towards the ski resort, walking through the Pretty Valley Pondage and on up the road (even ran into old Blundstone boots again. He didn’t look as fresh as the day before, probably because of the axe).

Our last hurdle was walking through the maze of roads and ski runs that is Falls Creek. The night before we had talked to the other group from our school and were given some sound advice- “Don’t walk down any ski runs with shrubs, particularly black runs. We walked up one and it took us nearly 2 hours to walk a kilometre and a half. The shrubs came up to my naughty bits. Just don’t.”

With the words “shrubs” and “naughty bits” echoing through my head, we tramped on looking for an easy way down a ski run. While we could have simply walked down the road to our end point, this option was more entertaining and got the students to come up with a plan on their own. Admittedly, in a large group, communication between teenagers is limited to yelling insults and frustration, so it wasn’t all smooth sailing. The end result had us walking down a ski run until we reached the bottom, then clambering through shrubs for 100 metres, walking behind a fuel depot of some description and then along a mountain bike track (I think) until we reached the dam wall and our bus. Clear as mud.

This trip was only small in comparison to others that can be undertaken in the area but we still managed 30 plus kilometres in just over two days. An achievement no matter who is doing the trip.

It always amazes me how different groups react in different environments. People doing coastal hikes are reassured by the chance of a swim at remote beaches whereas mountain hikers are rewarded with stunning, mountain top views and uniquely fragile environments. Whilst teens might complain on these trips at times, having them sit quietly on a mountain summit just absorbing the view, if for nothing more than the brief moment of silence, is a rewarding experience. Teenagers are often ridiculed and easily derided, but their appreciation and determination on hikes like this should not be underestimated. An appreciation of the Australian environment is a worthwhile endeavour for anyone, and should be experienced by all regardless of who you do it with.

Wayward Tip: Australia has a large amount of hikes that cater for people of all inclinations. With a bit of research, they are all doable so long as you take the right precautions and prepare properly. 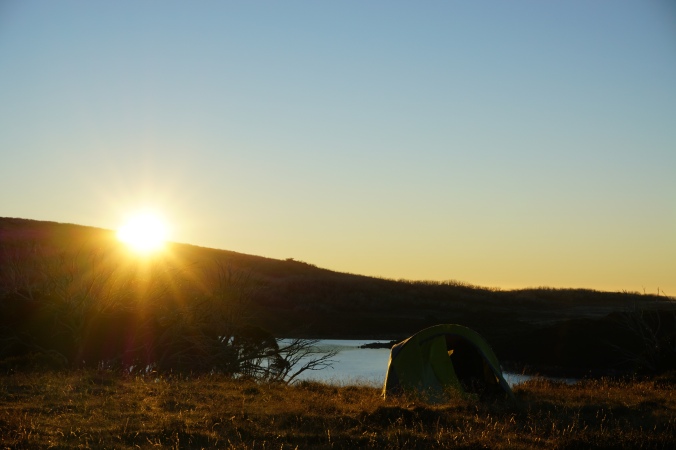