I love me a good travel myth. They are the kind of rumours that are so outlandish that they don’t seem believable yet a little part of you, deep down inside, can’t rule out the possibility that they’re true. It’s that need to discover if they’re true that drives them.

They form part of the mystique of travel. When researching your destination, they will surface, often on internet message boards or from a friend of a friend who went once, all to try and help prepare you for your trip.

So without further ado I’ll bring my own explanations my favourite myths, tall tales and theories.

The general demeanour of certain nations are popular myths that get plenty of miles. Unfortunately for the French, they always seem to be in firing line. Whether it is true or not, the myth that the French are rude is common place. The basis of this rumour is unclear to me. It’s human nature to judge other people, and the French appear to have rubbed a few people up the wrong way. A myth like this cannot be directed solely at France. Realistically, to assume that all the people of one country are the same is like cutting a deck of cards and assuming you will pull an ace out each time. You can insert any country into the conversation and somewhere in the world there will be a person willing to declare that country’s citizens undesirable. It’s like comparing football teams except with less merit. (For the record I know people who would both vehemently deny and agree about the French. Each to their own.)

MYTH– Street food in Asia will make you sick

Food is often used as a great advertisement for a destination but this doesn’t make it any less prone to travel mythology. When you ask a friend or acquaintance how their trip was, there will always be an unprompted reference to the local cuisine. Food related myths are rarely positive though.

I’m a big fan of Southeast Asia as a travel destination and as a result have heard quite a few stories about their food. In researching this post I Googled ‘travel myths’ and one of the first to rear its head was a warning about eating street food. The first time I visited Thailand I took an overly cautious approach based on myths like this. I became a pseudo vegetarian for a period of time based on the idea that all street food or meat based meals would make my internal organs make a quick and violent exit through my rear, traumatising me for years to come. Myths like this are usually started by someone who got food poisoning somewhere exotic and instead of being more vigilant, decided to do the only logical thing a person who has been stuck on a toilet for an extended period of time does- rule out all forms of food not found in a packet and then tell their friends to do the same. The truth is that if you pay attention and look at the conditions of the food preparation area or choose somewhere with a large turnover of food, you’ll be pretty right. Just ask yourself, “What would Lonely Planet tell me to do?”

Food myths get more specific than just threats of food poisoning. The rumour that tourists will be served dog when you travel through Vietnam is a classic. Firstly yes, there are restaurants that serve dog meat, but you have to search them out if you are that keen for a feed of Rover drumstick. The reality is that dog is quite expensive in comparison to other meats. The notion that someone would throw some into your meal is simply untrue. There is a higher chance of it in snowing in Hanoi than unwittingly eating dog meat. For the record, whilst on a tour in Vietnam, my guide informed me that the Vietnamese tend to only eat dog at the end of each lunar month as they believe it brings good luck and an increased libido. It’s important to remember that while the practice may not be quite your style, it is not something tourists need to concern themselves with. There are more pressing issues to worry about, like how to cross the street and live, for example.

Glasgow at 3 a.m. I’m sure there is a great story behind this photo. Didn’t get mugged though.

MYTH– If you go out in Glasgow after dark you will be stabbed, mugged or both

Crime is a favourite topic amongst travel aficionados. People who have been to more than a couple of countries all of a sudden become experts in the crime rates of each country they visit. Glasgow in Scotland, like a lot of other cities in the world, has a fearsome reputation as being dangerous once night descends. If these myths are to be believed, shady characters in dark hoods lurk behind bushes brandishing prison style ‘shanks’, waiting to attack people, hopefully robbing them of their money and dignity. The problem with this myth is that what I just described could happen in any city the world over. On a previous trip to Scotland, I roamed the streets of Glasgow until the wee hours of the morning, getting lost in the process, yet managed to return to my hostel with my money (what was left of it after the pub), free of knife sized puncture wounds. Would I recommend wandering around the streets of a foreign city late at night by yourself? Of course not. But that’s just common sense. There are a lot of dangerous cities around the world that are more deserving of the title that Glasgow possesses. 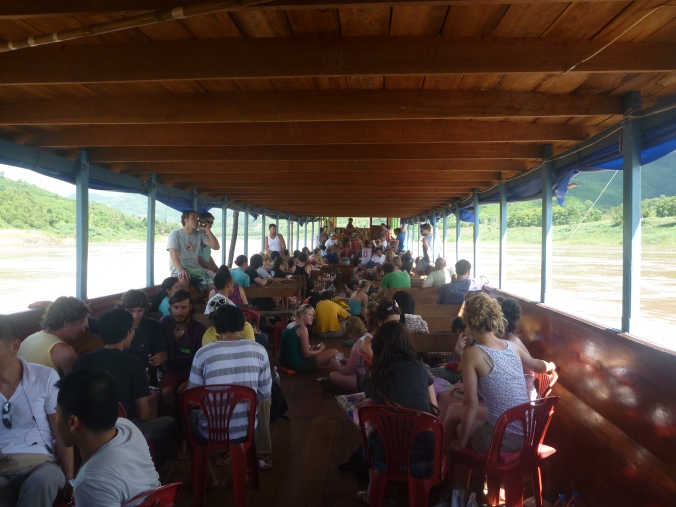 Even the boats are full in Asia. Long Boat down the Mekong, Laos.

Well of course it bloody is. Saying that public transport in Asia is crowded is like saying the sun comes up in the morning and sets at night. This is less a myth and more plainly obvious. Having said that, there are occasions you can get lucky and score a seat to yourself but do not think that this is the norm. Think of it as a gift and treasure the memory.

With every myth there is a reasonable explanation. The thing to remember is that it doesn’t matter what the myth is, each traveller is going to wait to discover whether it’s true of not themselves. As a kid, I was told not to touch the electric fence on my grandparents farm; I discovered why after the first time I touched it. Travelling and its myths are no different.

Wayward Tip: Discover what is and isn’t true yourself. What you experience will differ greatly to what someone else has already.