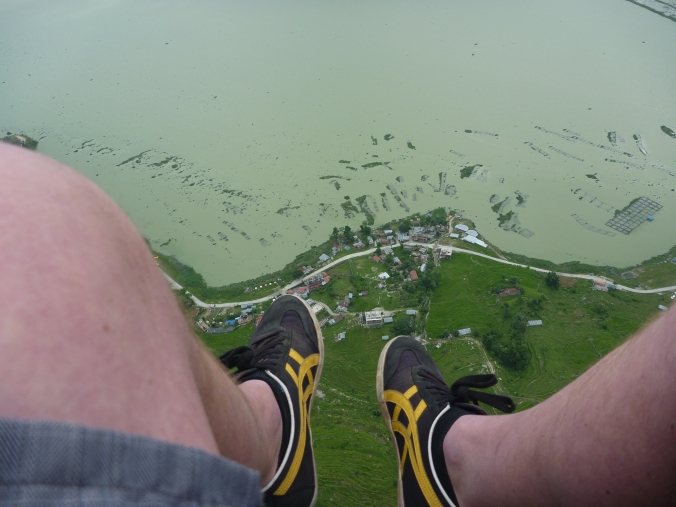 In the grand scheme of things, I’m pretty conservative in the decisions I make. I worry about the consequences of actions and look into things far more than any normal person might do. Some say this is good to do whilst travelling. Watching out for dangers and hazards can only prove to be positive, right?

In the general sense this is a smart, albeit dull, way to travel. In particular I scrutinise extreme and adventure based activities with a fine toothed comb. I think this is due, in part, to my (occasional) work in outdoor education, which examines risk regularly. So, when it came to the decision to paraglide in Nepal, I reluctantly agreed.

It took some persuasion too. With a rest day in hand, members of our tour had seen a large poster in the lobby of our hotel advertising paragliding as a way to see the city of Pokhara and its nearby lake. I was the only reluctant one, citing the chance of death as a reasonable excuse, but when the seventy year old grandmother of the group is the first to sign up, there is a certain element of obligation.

When our tour guide made us all sign indemnity forms, my fears were very real. This fear was driven by the common concern often associated with activities and transport around Asian countries- safety records. Any activity you do in the Western world has its own set of protocols and rules in order to help regulate the activity and prevent incidents. A lot of people see Asian countries as the Wild West and a touch lawless. We hear tales of cheap airlines with poor safety records and watch television shows dedicated to people getting hurt in foreign countries. Whether you want to or not, it seeps into your thoughts and you start questioning whether you will be safe doing various activities. Would I even have a parachute or would I have to flap my arms and hope for the best?

A ute came screeching to a halt out the front of our pick up area. Three Russians, two Nepalese and a Japanese man jumped out and ushered us over, every one of them talking over the top of each other. The mixture of accents made it sound like a bar scene from an Indiana Jones movie.

We were ordered into the tray of the vehicle and took off up the hill to our take off point. Our driver was an old Nepalese bloke who could barely see over the steering wheel. He needed to be small; there isn’t much room in a five seat, manual car when there are seven people sharing the space. What he lacked in stature he made up for in rally driving ability. Technically speaking, old, overloaded vehicles should not be able to drive up busy mountain roads as fast as we were. At one point, we could clearly see how close the car was to careening off the edge and down into the valley below. I could almost taste the gravel. He was overtaking cars three at a time on blind corners and not batting an eyelid. It was like he had right of way at all times, as if he was shuttle driver royalty. On the plus side, at least we didn’t have to worry about the feelings of nauseousness anymore.

“You will run. Run until we tell you to stop. Do no jump. Do not sit. Especially do not jump and sit otherwise we end up landing on the road down there. That hurts.”

There is nothing like an inspirational speech before running off the edge of a Nepalese hill. It means so much more in a Russian accent.

I watched the seventy year old launch with her instructor and do the exact opposite to all instructions we were just given. She walked a few steps, jumped and sat, her backside clearing the edge of the road below by millimetres. Had there been so much as a blade of grass sticking up, she would have come to a painfully messy end.

“That is not running. That is f**king stupid,” another Russian instructor eloquently put it. At the time I thought it kind of amusing, but he was deadly serious. It worried me.

I was last to go and was left with the skinny Nepalese guy, who reliably informed me he was the ‘first Nepalese person to paraglide’. I’m not one to question the credentials of the person entrusted with safely flying me to the bottom of a hill, but the thought of driving back down with our driver seemed more dangerous than any deluded paraglide pilot.

Once in the air I looked up and noticed just how big of an operation paragliding was in this part of Nepal. As far as the eye could see were parachute canopies twisting and turning with tourists attached safely underneath. Each company had its own launch points and all were within spitting distance of each other. I could have licked the back of the closest one, had the moment been right. 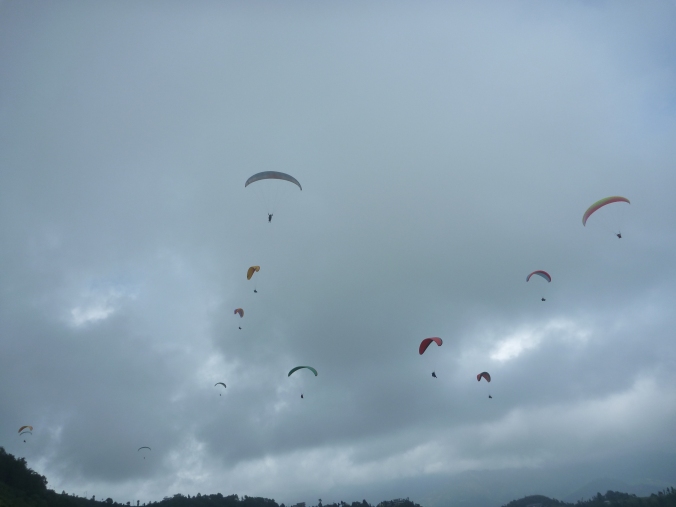 My pilot began singing. If you have ever been serenaded by a Nepalese, paraglide pilot, it’s quite an interesting experience. He started singing Rod Stewart classics, in particular ‘Sailing’. He didn’t know all the lyrics and was a little off key but I appreciated the effort- “I am sailing. I am sailing. Something, something. Sailing something.”

At one point we were so close to the ground, he tried striking up a conversation with a girl sitting on the hillside below. She looked around, confused, and he thought it was so hilarious he started chatting to me about it in Nepalese. Then, without breaking stride, he began singing another flight related song and moved on.

Some of these pilots let you steer, others would perform acrobatic manoeuvres, spinning until almost horizontal, whilst hurtling towards the lake below. Most just floated quietly, letting you take in the view in a very unique way. Some had more fun than others- one in our group heard her pilot mumble “Oh sh*t” and proceed to go straight down to the landing point with no explanation- but no one died, contrary to my earlier thoughts. 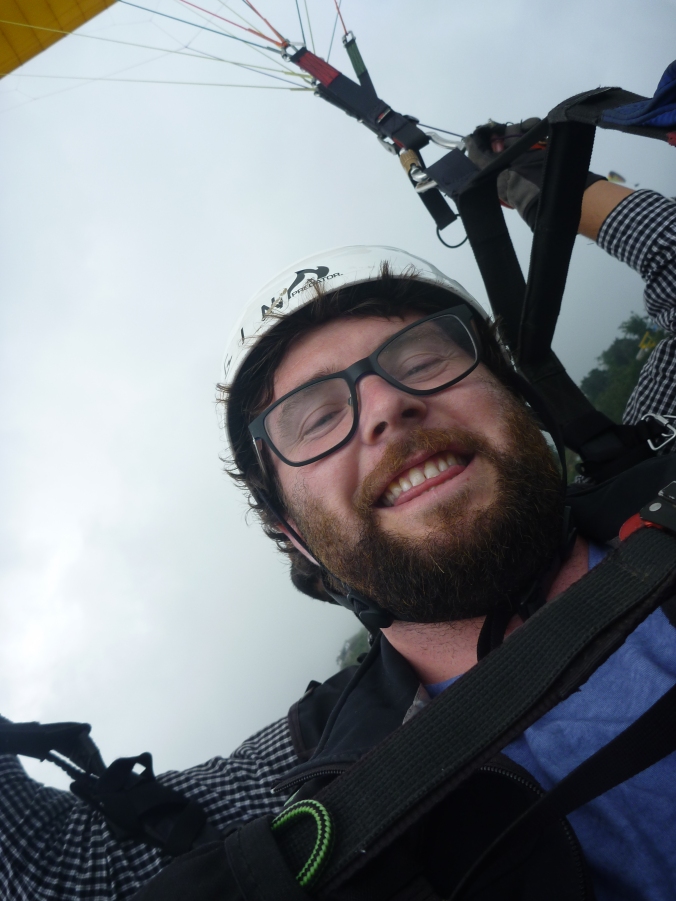 My paragliding experience was memorable and dispelled a lot of preconceived ideas I had about organised activities in Nepal, and Asia in general. What I considered to be a ‘risky’ activity was probably safer than crossing the street or eating chicken at dinner. It’s the things that you do every day while travelling, or at home, that have more chance of injuring you, not the random paraglide journey.

Wayward Tip: Get travel insurance. The last thing you need is a visit to a foreign hospital with a medical bill you will never be able to afford. 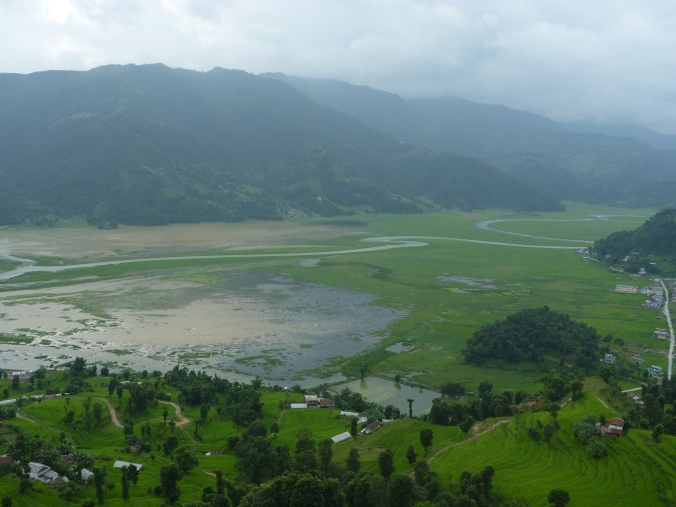