“Getting out of England”

If experience counts for anything when traveling, if you’re not waiting for a plane, you’re waiting for a friend. If the friend is there, you wait for a bus. If the bus isn’t the problem, you’re waiting for something else. In the case of our Scottish road trip, we were waiting for Alan to finish work. Every second felt like it lasted an eternity. Time dribbles along like the water pressure in the shower after your mother turns the washing machine on. You also have the same reaction: you scream and hurl abuse but you’re no closer to achieving your goal. In our case we had a whole day to wait and there are only so many reruns of EastEnders or episodes of the ITV game show Countdown that can keep you occupied.

That being said, we did have one major task: deciding on a route from the exceedingly crowded suburb of Clapham Common, through the hectic mess that was central London, attempting to avoid the decongestion area (a money saving tactic), and make it out the other side to gather our hard working friend. In today’s modern world, this task should not have been the daunting undertaking that it turned out to be. People these days have iPhones that can easily connect to applications such as Google maps and most cars have a navigation device like a TomTom or a Navman available to them.

We didn’t have that luxury. Instead we had the A-Z map book of London.

This little book is a saviour for many a traveller setting out on their own, trying to make their way around the labyrinth more commonly referred to as London. Thousands of ex-pats receive one upon signing up for various work agencies, trying to find a way to fund their travellers’ way of life. Thousands more have inherited their ‘English Bible’ from old friends before leaving home. It is quite literally the single most important book that you will ever possess while living and working in England. In the week before we left I had one almost surgically attached to my hand as I tried to find famous landmarks. I was even using it to find the tube stations I had left earlier in the day. This was the extent of how geographically embarrassed I was becoming. I was walking around the city though, at a pace far slower than one of the swiftest vehicles mankind had ever created- a Royal Mail van.

For the two of us driving it was hard enough to find what page we were beginning on let alone the sequence of pages required for us to make it all the way across town. A lot of time was spent praying for traffic lights to turn red so we had half a second to stop, gather our bearings and realise that we had missed our turn. We would pull up to the lights, he would yell street names out to me and I would scan the pages like a Sudoku obsessed retiree. We would both be trying so hard to figure out where we needed to be that at every stop we were being blasted by the horns of cars behind. London drivers are either the most impatient or most gifted vehicle operators going around. Their ability to jump on the horn as soon as the light changes is phenomenally impressive or plain annoying depending on your outlook. For us, it only increased the tension of driving in a foreign city, in an aging car, trying to read maps that were the size of an A5 piece of paper. The crescendo resulted in us having to make a U-turns regularly. At one stage we ended up going down a narrow, one way street that looked more like a drug dealer’s place of business. We were forced to follow this street until we could find a place with enough room to turn our car around. We eventually waited at an intersection for 20 minutes to make it back to a road where we didn’t feel the need to lock our doors for safety. Naturally, once back in traffic, we were now travelling in the wrong direction.

It’s quite a thrill to know you’re driving over one of the most famous bridges in the world, Tower Bridge. You get that warm fuzzy feeling of accomplishment and pride as you’re doing it. You look out the window and nod to all the tourists as they tear around, secretly hoping they will look at you, give you a big thumbs up and acknowledge that what you are doing is memorable. Think to yourself about how surreal that moment in time would be. That vision is quickly erased when you realise that while you were creating memories with imaginary friends, you neglected your role as navigator and forgot to tell the driver that a turn was required roughly fifty metres behind you. That smile starts to fade when, through the miracle of English road designs, you are stuck in the flow of traffic that is now heading back over Tower Bridge, towards the battle ground you have just come. The people don’t look the same on the second crossing. Instead of being happy tourists, they look like angry locals, middle finger extended high, fuming at the fact your joyriding around their city. I slunk down in my seat and hoped my driver could find a place to turn. 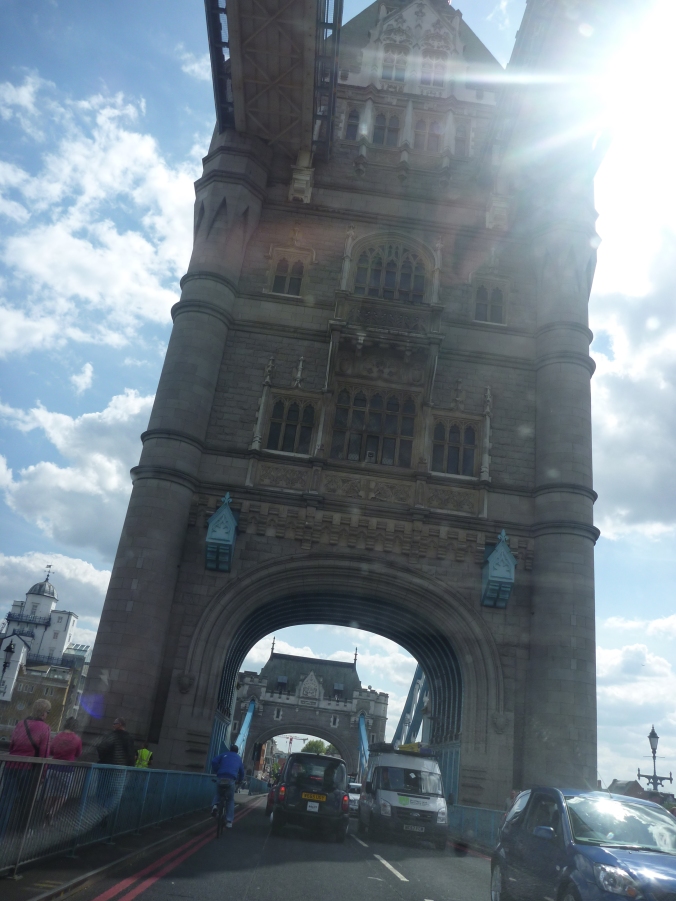 In the space of two hundred metres we had crossed Tower Bridge three times and added an extra hour to our trip.

Thankfully the further we got from the city centre, the easier navigation got. Roads started to free up and missed turns somehow felt easier to correct. We were back on track.

Our original, extremely rough, plans had revolved around getting onto the main highway located in the centre of England and follow it all the way up to Scotland. Further research had told us that highway was the M1. It looked like it should have been a simple operation; we would drive in the general direction we thought Scotland was and follow road signs after that. The unfortunate part of this fool proof plan was that we had no idea which way that actually was. After driving in circles around London, left felt like right, up was down and every sign seemed to point to in the wrong direction. With our luck, we could end up in Wales, not Scotland, and never know the difference.

So, when we finally made it to pick up our gainfully employed friend, we were thrilled to see he had acquired a road map of the whole United Kingdom. This was no mean feat either; we had barely noticed any shops other than the odd pub or off-licence corner store. The best part, other than he was resting comfortably in a pub, was that the pages were huge. No more flipping pages at a million miles per hour, going cross-eyed as you pressed the book against your nose.

English Summers are a different proposition to Australian ones. The hours of daylight feel like they stretch on for days. This isn’t necessarily a problem unless you’re new to the country and begin to lose track of time. Sitting in a pub on a Friday afternoon, sipping pints is the perfect setting for such difficulties. When the travel time to the next destination is more than seven hours, something has to give. For us it was the realisation that if we didn’t get back in the van and begin our journey north as soon as humanly possible, we would still be sitting up at the bar, drinking pints with the locals at closing time. Not that this was deeply concerning to any of us, mind you. We would have been happy to stay until last drinks, but driving a full day in a foreign country with a hangover scared us more than any liquored up local ever could. It was enough incentive to get on the road again.

Every now and then travellers have the ability to become a little self-indulgent. You stop and visit places for no reason other than to tell people that you’ve been there. This is done so that when you meet up with other travellers you can play the game of one upmanship.

“Yep. You been to Manchester?”

“Yep. You stop in Nottingham?”

“Yep. What about Cambridge? Did you have dinner at a little river side pub with a view of the park?”

“Oh mate. You should have. You missed out.”

Our stopping in Cambridge was one such moment. 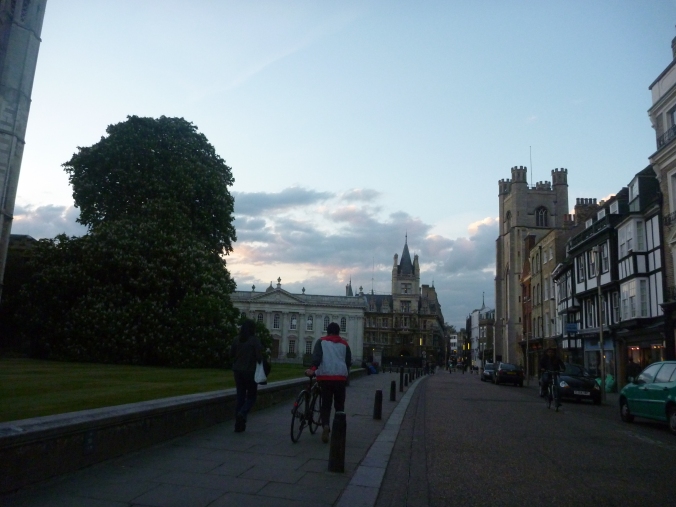 I have clear recollections of first hearing about Cambridge when I was a teenager in Australia. I had visions of well-spoken students with proper English accents, wearing tweed jackets, studying strange subjects such as Shakespearian biology or medieval economics. The kinds of courses that seem ridiculous because you have little chance of understanding what attracts people to them in the first place let alone what it qualifies them for, other than the right to brag, “Oh, I went to University at Cambridge. Here, have a brandy.” For the record, I spotted no tweed, but there seemed to be a vast amount of drinking establishments, leading me to believe that it was a proper university town after all. 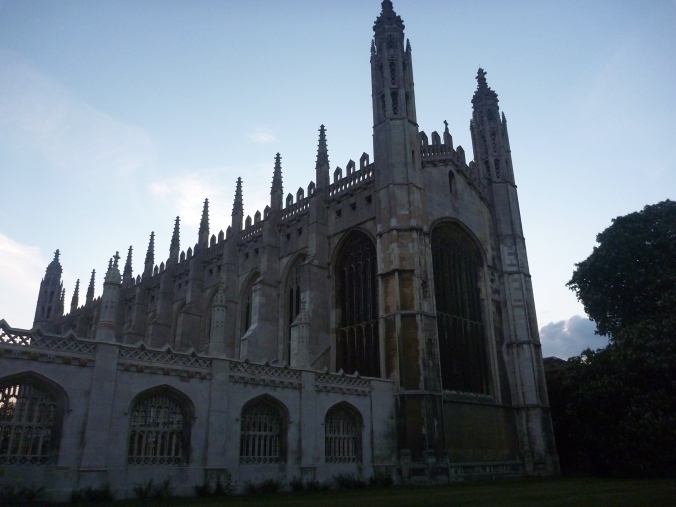 Similarly, camping off the side of a side road that night, behind a hedge, out of view, on the outskirts of Nottingham is another example. A useful piece of knowledge I had picked up in a pamphlet was about U.K. camping laws. At the time, travellers were allowed to camp in areas not expressed as camping so long as they were not camped next to a road or expressway and have the permission of the land owner. A dirt road behind a hedge seemed close enough. It was dark and we were well concealed but I was still uncomfortable. One of the guys set up a tarp and slept outside. He was comfortable in the knowledge that he would be the first to die if we were attacked by English vagrants. It had not escaped my thoughts that we were in the vicinity of Sherwood Forest and I, being a fan of Robin Hood, was fairly excited by that fact. Nevertheless, when I woke up in the morning and looked at where we were situated, we appeared more like tramps living under a bridge. Not a look of which Sir Robin would have been inspired by.

That day we would make it to Scotland, the whole aim of the journey, but escaping England was an expedition of its own. When I arrived in London excitement had overcome me. While waiting to leave on the Scotland trip, I went flat out. At no stage did I stop to take in and appreciate where I was and what I was doing. As much fun as I was having, I was running on the pure adrenalin of finally being on the trip I had saved so long and hard for. This new phase of my trip allowed me to look back and be truly happy about the path I was going on.

Scotland had a lot to live up to.