In my working life, I find myself to be a traveller. I’m fortunate enough to travel to some amazing destinations within Australia and be paid to do it. This can come at a cost; I have to share it with other tourists and the teenagers I am entrusted to lead. Every year it brings me to Wilson’s Promontory, one of Australia’s oldest national parks in the south of Victoria, as an outdoor leader. For those of you who haven’t been here, I urge you to check it out. You will be hard pressed to find such an extraordinarily rugged landscape of mountains, beaches and bushland in the one location and as easily accessible to all walks of life.

Each time I do it, this trip provides everything, plus more.

These journeys always start the same way; a late night drive and a hasty set up of tents. Having to come from Central Victoria, via Melbourne, adds its own intricacies- like which crime riddled outer suburb do we stop in for dinner. The choices are slim and often involve greasy or questionable Chinese takeaway, filled with meat (type unknown) and curious florescent sauces, none of which create enough energy to get you back to the bus, let alone a forty kilometre hike. The variety, at least, steers you away from large chain fast food restaurants but telling a teen that he is being denied his fries is fraught with risk, like advising an alcoholic that the bar has run dry.

As we began to set up, the weather usually comes in suddenly and torrentially, waiting long enough for all the students’ tents to be laid, vulnerable on the ground, before letting go. Attempting to set up camp in the dark with rain coming down sideways, students squealing and cursing, is the ultimate challenge.

“My tent is full of water.”

“There are no poles in mine.”

Other years have involved the warning of wombats. These naturally created bulldozers will forgo anything for a piece of human food. A lot like teenagers, actually. They will quite literally rip open the side of a tent to get to a food wrapper inside. Sometimes, as has happened to me, they will rip a tent open purely because it is in the way, like some kind of obsessive compulsive wanderer. 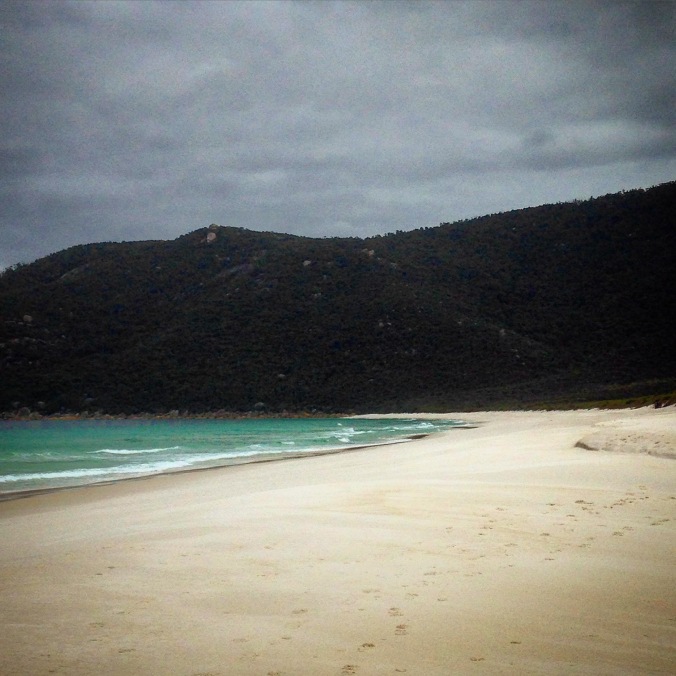 Once on the track, the actual journey begins. The Sealers Cove-Little Waterloo Bay-Tidal River loop is quite well known. Any internet search of top Victorian walks will produce details and even Lonely Planet has a spiel about it, mentioning the wildlife and ocean views, neglecting to note the erratic weather patterns or how feral the native wildlife can be. It always amuses me that animals are used as an attraction yet can also be a major problem. Either way, this means that tourists line the tracks like ants at a picnic.

With so many tourists flooding the trail- both foreign and local- it’s inevitable that school groups and public will have to share campgrounds. There is no way around it. In the fourteen or so times I have completed the track, never have I had a campsite with my group as the sole occupants. The look of despair on the faces of unsuspecting victims tourists as they stagger into the various campsites and realise that a pack of rabid teenagers are already set up, is heartbreaking. There can be no worse a feeling after puffing, panting and sweating up and down hills to finally make it to your destination only to be greeted by people who don’t look as if they have ever sweat and are overly enthusiastic and loud.

This might be due, in part, to a slight lack of preparedness. People walking in jeans, minimal water capacity and cheap equipment top the list of interesting hiking choices. Couples frequently walk together, although the distribution of gear is vastly lopsided. While one person carries the majority of the equipment, the other bounces along sprightly, wearing little more than a bum bag and some distinctly fashionable attire, sipping water from a small drink bottle. The look of steely determination on the face of the pack wearer becomes evident at camp. Only the other week, I was awoken at one a.m. by what I thought were howls of despair, like an animal had ransacked a hikers food and they would be left to eat bark for sustenance in the morning. “OOOOOOOOOOOOOOOOhhhh” and repeat. This scenario is not uncommon, in fact it is regular. But on this occasion, I was wrong. As I listened to the noise, I realised that it was far too rhythmic to be directed at scavenging animals, the lack of anger and cursing was a tell-tale sign. The realisation that you are actually listening to an overly amorous couple who have forgotten that tent walls are quite thin and bush campsites bounce sound around like a bikini model in a rap video. When I woke the next morning, I enquired with my co-leader as to whether she had heard the shagging tourists. “Yes,” she replied, adding, “She was faking.” Ouch. Regardless, when I walked past the gentleman in question, he had a beam about him that told me any suffering he may have endured the day before was well worth it.

Possums are a problem as well. In particular, they rule the Sealers Cove campground with a screechy iron fist, descending from the trees at night like a furry plague of overweight squatters. The fat, brown one is more mafia don than possum, picking off any food foolishly left out by unwitting or misguided visitors. Either they are incredibly brave or outlandishly unfit, because they don’t flee when deterred; rather they climb the closest tree to a height unreachable by humans and wait until the coast is clear, almost mocking you in the process.

Drinking water is available at the various campgrounds along the hike, being piped in from underground springs. Yet each water source is accompanied by a sign stating that “The water is not to world health standards” which really means “We think the water is fine but someone got sick once and blamed us, so we had to put up this sign. Job done.” The reality is that it’s ok to drink, the only flaw a slight, tannin discolouration. Convincing students to drink this can be difficult but a simple iodine treatment does the trick. In fact most hikers will treat the water somehow, more for peace of mind than fear of illness.

Teenagers, for their faults, have a funny way of approaching a walk like this. It is not so much their expressed shock that they may have to walk up a hill but instead revolves around using the term “YOLO” (You Only Live Once for those of you older than the age of 22) routinely in regards to every aspect of the hike.

“Put your gaiters on, please. Snakes are everywhere along this track.”

“Exactly, that’s why you need them on.”

“Yes, I understand that but I don’t think you understand what death by snake bite is like…”

“They make my shins sweat, though.”

“Would you rather die or suffer shin sweat?”

The weather is the final mystery of this glorious place. In the rainforests and marshlands, humidity can sit heavy upon you, like giving your little cousin a shoulder ride; it seems fine to begin with but soon becomes more oppressing. If it decides to rain, leeches soon emerge, worming their way up your leg until they find a sucking point. In contrast, the rocky parts feel helplessly exposed to the elements and the plant life there resembles just that- gnarly and twisted. The sand dunes and boardwalks are two faced; fine in the rain yet hot and unrelenting in the sun while the beaches remain beautiful no matter what the weather throws at you.

All these moments, temperamental weather included, make this walk memorable. From finishing each days walking at a cove or bay to the spectacular cliff top views, it is almost impossible not to enjoy your time in this spectacular place.

6 thoughts on “Tents, tourists and teenagers”