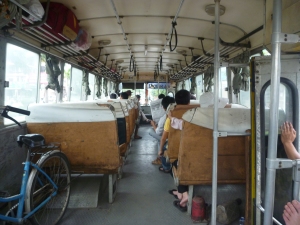 Often, bus travel is the cheapest and simplest way to get around a Southeast Asian country. All you need is a destination. No addresses required for drivers, no one trying to rip you off. Easy and straight forward. Making it to the station on time is the most difficult step in the process.

This is fine in principle, but in some places, bus travel can be one of the most uncomfortable experiences imaginable.

Take a simple trip from Ha Long Bay back to Hanoi, for example. Everything that can create discomfort can happen in the space of one, three hour trip.

Arguing people are hard work to be around on a good day, let alone when you are trapped in a confined space for an extended period of time. On one particular trip, a Spanish couple- duelling Spaniards I like to call them- set off on an argument before the bus had even pulled out of the compound.  What many people will tell you about the Spanish is that when they are passionate about something, whether that’s a conversation, singing etc. they put their whole body into it. The shrugging of the shoulders, hand gestures, smacking hands together like a politician at the lectern. On this occasion their voices increased in volume as the ‘discussion’ escalated. Slowly they began talking over the top of each other, until they started screaming. As they were speaking Spanish, the whole scene sounded like two toddlers arguing over who gets to play with the toys next.

Every now and then familiar sounding words were used that shed a little light on the true meaning of the heated dispute. 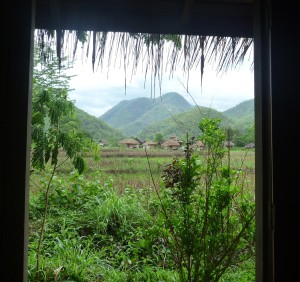 “Finestra? Does that mean window?”

“I’m not sure. Grasias is good bye though, right?”

“I think they are swearing at each other.”

Everyone else was listening in, trying valiantly to figure out what the argument was about. They only people on the bus not curious were the other Spanish passengers, as if this was normal and second nature to them. This lack of reaction indicated the topic must have been fairly trivial.

Next came our own interpretation. We analysed the situation like a sports broadcaster commentating the big game:

“So, what do we think is happening here, Jim? Is it serious or are they just having a lively chat that we’ve misinterpreted?

“Bruce, I’m ninety per cent sure they are arguing over who gets the window seat. As we can see, he is gesturing wildly in the direction of the window, indicating that he is unhappy to be sitting by the aisle.”

“Could he be angry because she’s been flirting with other gentlemen?”

“Highly doubtful, but not improbable, Bruce. There is a chance that he forgot something like a camera or a phone, though.”

“That would explain why he is so upset…”

“Or they could just be hungover.”

Then they stopped yelling at each other as abruptly as they started and began making out. Clearly the Spanish are passionate people. And for the record, it was because they both wanted the window seat. They somehow slept the entire trip anyway. Go figure.

Attempting to sleep is another hurdle to conquer, especially if you luck out and get a seat at the back of the bus. Vietnamese bus drivers have a skill of being able to find every pothole in the road. So dedicated to this craft have they become, it seems routine for them to swerve onto the opposite side of the road if better potholes can be found there, like they are playing a massive version of the arcade game Whack-a-Mole (or whatever the actual name is). This attribute appears based more on instinct than driver requirement.

Every ripple in the roads surface is equal to bouncing around on a trampoline, speed humps being the worst. Without exaggeration, I have seen people rocket into the roof of a bus when the driver hits a hazard with even the tiniest amount of excess speed. Heaven forbid you should fall asleep either. This can lead to mild concussion as your skull bashes into the window the moment you contemplate a quick kip. These buses all seem to have a thousand secret knobs and corners, remaining hidden until you drift off. As you close your eyes, they jump out and attack you, usually around the head or shin to maximise damage. When you attempt to investigate where the hazard is located, however, it remains out of sight, only  revealing itself again when you become drowsy. 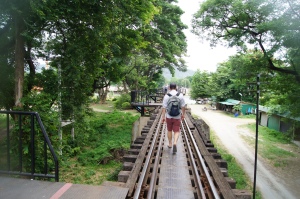 Walking along a train track. A better option than bus travel sometimes.

By this stage your legs begin to seize up as seats designed for small framed Vietnamese folk cramp you up as your knees get squashed against the seat in front. By this stage the air conditioning will have little effect. Sweat will begin trickling down the back of your legs, likely originating from your knee pit, as it struggles to get air, pressed firmly on the cheap, 1970’s vinyl seat.

It’s only when you alight for the one designated rest stop that you realise how much of an effect that one of these trips actually has on your body. You limp off, mentally drained from trying to ignore other passengers, dehydrated from sweating, slightly concussed and drowsy from interrupted sleep. Not to mention you’re busting for the loo because there is no toilet on the bus and you only make one stop.

It is essential to use public transport on your travels and, as teleportation doesn’t exist yet, you may as well come to terms with it. All the mentioned incidents above are not worst case scenarios either, in fact are far more common than you think. If you are prepared for it though, it will feel more like an adventure rather than a disaster. That’s what you want. So long as every moment is memorable, it shouldn’t matter.

Wayward Tip: headphones, music and a pillow. It’s going to be uncomfortable and sleeping doubtful. But if you can distract yourself, block out the noise and cushion your head, you’ll laugh instead of cry.

There was an error retrieving images from Instagram. An attempt will be remade in a few minutes.