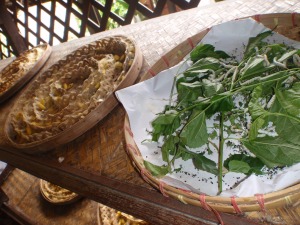 Spicy food has been a cornerstone of Asian cuisine for centuries. Chilli flakes, oils and powders are regularly found in condiment baskets on restaurant tables, ready to enhance already flammable curries for the ‘diner’s enjoyment’. Most wait staff will even ask you how spicy you would like the meal to be. This peace offering can merely be smoke and mirrors but, that being said, I have heard of restaurants offering “Thai hot” or “Normal hot” as alternatives on their menus.

In Thailand I discovered, in graphic detail, how spicy food isn’t something I deal well with. Every time I visit Southeast Asia I come to that conclusion. Whenever I order, I religiously attempt to ignore anything that could be referred to as ‘hot’ to avoid unwanted, spice related duress. Watching someone else suffer through an ill-informed meal choice, although sadistically amusing, further punctuates the idea that eating food which feels like a mouthful of hot embers, is not my idea of fun.

On a recent trip overseas, I ended up in the Kanchanaburi Province of Thailand. I watched a friend order a jungle curry from the menu. Knowing he could handle hot food and being of sound mind, I assumed he understood what he was requesting. When the waiter returned and asked him how hot he wanted the curry to be, his response was a polite decline, “Not too much spice, please”.

The waiter looked nervous and quickly walked away. This should have been a warning sign to those paying attention. As he reached the chef, I saw them both laugh and make a call to the kitchen.

The jungle curry arrived swiftly. Too swiftly. A steaming bowl of spice was sitting on the table within five minutes of ordering. How do you make a meal to a diner’s specifications that quickly? You send it by motorbike, from a different kitchen, apparently.

Before he had taken the first mouthful, he pulled a branch of pepper corns from his bowl. Amongst the peppercorn were pieces of small, green capsicum. (We found out a few days later- after my friend did a cooking course- that they were actually small green chillies; so hot they could melt the hair off a mans back.)

I watched as my friend eagerly tucked into his meal. At about this time I noticed beads of sweat materialise on his forehead. They appeared quicker than he could wipe them away. Anyone who has eaten a spicy meal knows of this spice related sweat.

With each mouthful, he chewed slower, the actions of someone who had bitten off more than they could manage. With the end of each bite came the customary drawback of air in a vain attempt to cool the effects the spices had on his mouth.

I offered him some of my meal instead. He took a spoonful and replied, “Chewing makes it hotter.” I didn’t know what that meant, he seemed to be babbling, but the spice was now so encased in his mouth that it was dictating everything he did.

I looked at his face. What most people would call ‘tears’, streamed down his cheeks. But I knew better- my friend was not the type to cry over a poor meal selection, there had to be another reason. Then it dawned on me- the jungle curry was so hot that he was sweating from his eye balls.

There comes a point when you have to confess and admit that you cannot finish your food. When you are full or if you feel ill are the top two reasons. I assume having sweat protrude from your eyeballs due to the meal being so damned hot would be number three.

With that, my friend pushed away his bowl and slumped down in his seat.

“It’s not that I couldn’t finish that worries me. It’s that I’m going to shoot flames out my arse when I go to the toilet tomorrow.”

During the course of our meal, the wait staff had been standing in the corner, giggling uncontrollably as my friend battled valiantly. I thought back to the moment he asked for the meal to be mild. If this was the mild version, what the hell would have happened to him if the hot one had come out?

Acutely aware that curries and the like will already contain an element of spice, some people order them in the hope that it will only be a mild kick in the teeth, rather than feeling like the effects of full blown, blunt force trauma. But spicy food is as Thai as squat toilets and Chang-overs- you cannot avoid it. Trying to do so will short change your culinary and cultural experience.

Wayward Tip: Never get your meal ‘Thai spicy’. Ever. All you will end up doing is burning the tastebuds from your tongue. But if you decide to have a go, get those fluids up and have a chaser handy because you’re going to want the relief.