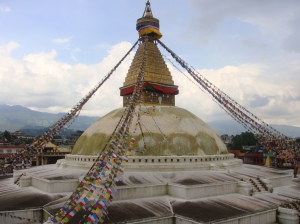 What stands out about this story? –

“I woke up in the morning and got up straight away. I hadn’t had any drinks the night before and was feeling great as a result. I ate my complimentary breakfast, which tasted delicious, and was on time for the bus. I even had a seat to myself. The bus was early and entry to temple was cheap. I looked around and wasn’t harassed by anyone. I smiled and caught the bus back to my accommodation. I didn’t even sweat and had a solid bowel movement to round out my day.”

Anyone who has ever travelled knows that this story is complete bulls**t. You don’t have to be talking about travelling to know that. Even if your day runs smoothly, something odd is bound to happen.

“I woke up, hung over as a tourist at Mardi Gras. I’d only had three hours sleep and completely forgot about the tour I’d booked the afternoon before. I’d experimented with some homemade booze from a local I met on the street, so I was feeling fairly sketchy. I went down to the breakfast buffet and stuffed a handful of pancakes in my mouth because they were the only thing I thought I could stomach. I tried some eggs but it made me want to throw the pancakes up all over the floor. I only just made the bus but had to chase it down the street. I didn’t have the correct change so had watch the bus drive off. At that stage I really needed a loo so I ducked into a café. The toilet paper was made of rough grade sandpaper. When I thought I’d finished my business I realised I had to go back in for round two. I felt strong feelings of empathy for whoever had to clean up. Now I was hung over, sweating and had diarrhoea. I crept out without buying anything, embarrassed about what I had done to their bathroom. I found an ATM, grabbed some cash and caught a cab to the temple to try and catch up with my tour. I needed to poo again. The entry price was ridiculous but I forked out the money so I could use their facilities. I was forced to use the bidet hose- a.k.a. ‘bum gun’- because there was no toilet paper. My tour had left without me, because they didn’t realise I was there in the first place, so I caught the bus back to my accommodation. I had to sit next to a large man, who took up the majority of the seat, squeezing me up against the window. He had never heard of deodorant. The air conditioning wasn’t working either. When I finally made it back to my hotel, I raced in, as I had to s**t again. Even though I was fairly ill, I still went out for beers that night.”

It’s amazing how no travel story, in the history of travel stories, is ever about a safe, happy day that ended without someone getting lost, injured, harassed or threatened. The fact is the best stories involve situations that, at the time, are scary, frustrating or plain stupid. These stories should the first port of call when somebody asks you the inevitable question, “So, How was your trip?”

One of my favourite stories involves riding  a scooter down a road in rural Thailand. A truck came tearing down the wrong side of a single lane road towards 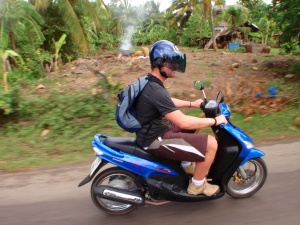 us, attempting to overtake another truck. Meanwhile a bamboo wielding child was riding a buffalo just off the verge. We passed the buffalo rodeo at the exact moment the truck flew past; roughly at the same speed (give or take a few kilometres) a fighter plane needs for take off. We were left with a one metre gap between animal hooves and truck mirrors. The truck honked its horn as we passed, just in case a truck driving at us was something we might not have noticed. Our eyes were wide, sweat dripping from every pore. When we stopped shaking we decided it was safe enough to laugh.

The majority of my adventures throughout Southeast Asia went according to plan. But do you think I mention them come story time? Not a chance in hell. I’ll tell the above story first followed closely by some other near disastrous events. Like the time I had food poisoning on a Lao bus, for example. Or the time some Vietnamese locals got me drunk on a sleeper train so that they could persuade me to move seats in order to finish their game of cards. It’s not that other experiences are less memorable, but rather these ones are much funnier.

Fishermen, as funny as it may seem, have the right idea. Their stories start small, almost truthful, but expand and grow until the truth is nothing but a spec on the horizon. This is how good stories should be told. Your experiences should be like the fish you want to catch, not the ones that you have to throw back. I like to call this the ‘Fisherman Effect’. How often does a fisherman tell you a story that doesn’t involve a near miss or have some form of exaggeration?

Maybe people tell tales of woe to prove to their friends that they are the more serious traveller. Perhaps, tales of misfortune provide a more harrowing experience that is worth telling as a warning. Or maybe it’s purely about entertainment. Either way, these are the stories that people tell each other when they return to the real world and not one person should be ungrateful for it.

Speaking of which, did I tell you about the time I almost vomited on a monkey…

Wayward Tip: Exaggerate. Let’s face it you’re going to anyway. If you want your story to have balls, give it a boost. Just remember not to make it unbelievable. It’s one thing to say you drank 32 beers, its something completely different to say you played poker with a yeti. You get my point.